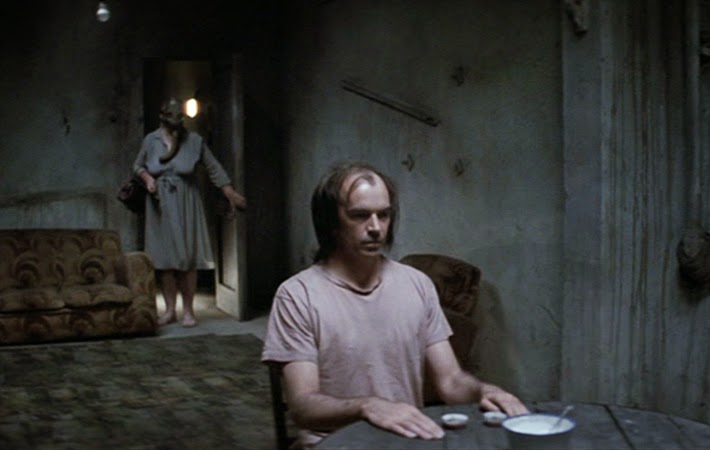 BAD BOY BUBBY was never going to be an easy sell. After all, a film about a thirty something man-child imprisoned since birth as his mother’s sex slave doesn’t exactly make for comfortable viewing. Moreover, the concept sounds like little more than a blatant attempt at provocation. But while it’d be difficult to deny that BAD BOY BUBBY doesn’t, at least to some extent, court the shock factor, it does do more than just push boundaries. Yes it is dark and unsettling, but it’s also grimly comical, technically innovative and in parts, surprisingly poignant. The film echoes the likes of ERASERHEAD and more obviously DOGTOOTH, but the beguiling tone and unique brand of weird is entirely its own — and for this reason BAD BOY BUBBY deserves exposure.


For all the incest, rape and cling film murders, this Australian oddity is essentially a journey of discovery. Having swallowed his mother’s lies about a deadly gas lying just beyond the confines of his bedsit, Bubby (Nicholas Hope) knows nothing of the outside world and the years of abuse have left him severely disturbed. But after his estranged father returns home and disrupts the status quo, the Forrest Gump-like protagonist begins to doubt the credibility of his mother’s word. So, after his curiosities finally get the better of him, Bubby makes his escape, embarking on an adventure into the wider world that proves to be thrilling, joyous, scary and surreal in equal measures.
Essentially a child in a man’s body, the naïve Bubby is experiencing everything for the first time, but because he appears adult, his discoveries aren’t drip-fed as they would be in conventional childhood — he’s getting it all at once. It’s a unique perspective and one that writer/director Rolf de Heer uses to explore the staples of modern society. Bubby is an observer and through his observations he discovers religion, music, alcohol and love. Stumbling from one peculiar situation to another, the infantile lead experiences the best and worst of humanity; all of which makes his wanderings an experience that isn’t always pleasant, but is strangely compelling.
BAD BOY BUBBY is one of those films that, for better or worse, will stay with you. With its off-kilter tone and memorable imagery, it burrows under your skin and infects you with its strangeness — the organist’s existential reverie and the prison bagpipers are moments that prove particularly striking.  And the fact that this series of odd incidents doesn’t quite gel into one cohesive whole is sort of irrelevant — because they’re not supposed to.
Described by its director as “one large experiment”, de Heer employed 31 separate cinematographers, one for each new scene after Bubby’s escape. Such an approach ensures that Bubby's new experiences adopt their own individual identity and thus feel as fresh for the audience as they are for the film’s protagonist. But it’s in his use of sound that de Heer really gets creative. Having recorded the dialogue via binaural microphones sewn into Hope’s wig, the disorientating audio track—which lurches deliberately from muffled speech to piercing assaults on your ear drums — acts as a very subjective reflection of Bubby’s sensory overload. Such an approach is likely to frustrate some viewers but then, BAD BOY BUBBY isn’t a film for everyone. But if you’re looking for something different, then really, look no further.