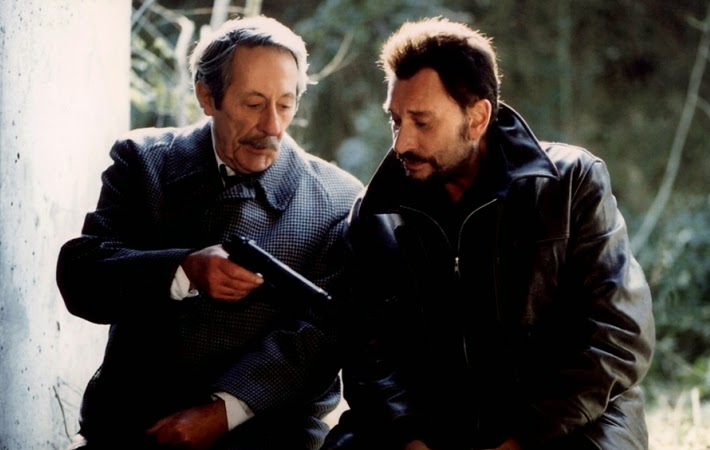 According to Monsieur Manesquier, one half of THE MAN ON THE TRAIN’s central duo, there are two types of people: planners and adventurers. The difference between these two categories can be summarised easily. A planner will always keep a spare toothbrush to hand; whereas an adventurer will run the gauntlet of picking one up as and when it is needed. Manesquier, a retired poetry teacher played by Jean Rochefort, is a planner; he has three tooth brushes. But Milan, the rootless, nomadic gangster played by Johnny Hallyday, is an adventurer. The two men are polar opposites. They are ying and yang. But when their opposing lifestyles collide in Patrice Leconate’s THE MAN ON THE TRAIN, the unexpected consequences make for a truly charming filmic experience.


When Milan arrives in a sleepy French village, his intention is to discreetly prepare for an upcoming bank robbery. But after finding the town’s only hotel is closed for winter, he is taken in by Manesquier, a talkative and amiable local who’s awaiting heart surgery at the weekend. Over the following days, the two men form a tentative friendship and in this short space of time, the pair gain a glimpse of a life that neither has ever known.

Having spent his entire life in the same town, Manesquier is defined by stability.  He exists in a world of comfort, stillness and rigid routine. Yet he dreams of adventure, danger, excitement and spontaneity; this is a man who relishes the thought of a bar room brawl because ‘it would have been something to remember’. So when Manesquier discovers that Milan is in town to rob a bank, far from being shocked, he actually seems rather excited. To Manesquier, Milan is a sexy, rugged, brooding, John Wayne type; a sort of urban cowboy, complete with tattoos and a leather jacket, who’s travelled the world and loved a thousand woman. In short, he is everything Manesquier has ever dreamed of. But the grass isn’t always greener on the other side and while Milan may appear to be the epitome of classic cool, his rough and ready lifestyle has clearly taken its toll. Manesquier is surrounded — and to some extent stifled — by memories, but to a beleaguered drifter like Milan, such a quiet, comfortable existence has an obvious appeal.

With the two men seduced by the lifestyles of the other, the subsequent altering of priorities and switching of roles is funny and delightful in equal measure. But it’s the strong sense of pathos that ultimately makes THE MAN ON THE TRAIN such an affecting experience. Though these two men appear very different, they find common ground in their shared — albeit it differing — dreams of what could have been. Having reached a precipice in their respects lives, with Manesquier awaiting surgery and Milan preparing for the robbery, both are looking back and questioning the choices that made them the people they are. But the film never over plays its hand. Working from an endearing and pleasingly economical script by Claude Klotz, THE MAN ON THE TRAIN is a perfectly judged meditation on aging and regret that lingers long in the memory. Seek it out.