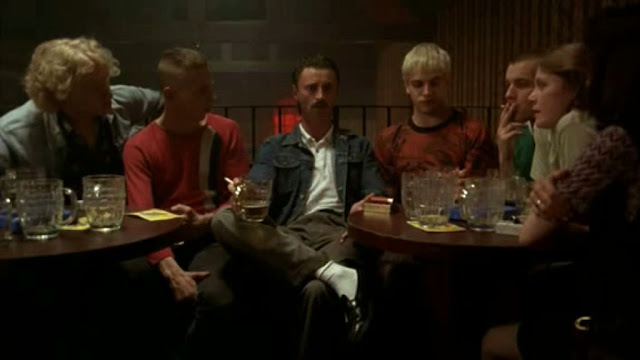 Personally speaking, I’ve always found ‘drug films’ (by which I mean films about drug addiction) to be a little hit and miss. For me, the genre is far too prone to cliché and as such, the films can often feel inadequate and overly simplified for the sake of dramatic or sometimes comic effect. In fact, when you think about it, there are very few truly great films about drug addiction. For most, Danny Boyle’s Trainspotting would be considered one of the rare exceptions; after all, it’s certainly had its fair share of critical acclaim. But while there’s no denying its greatness, Trainspotting cannot be considered among the few great films about drugs, because it’s not really about drugs at all.


Following the exploits of a gang of heroin addicts, there is of course, no disputing the presence of narcotics in Trainspotting. The film is honest about the lives of its protagonists and doesn’t shy away from their drug use. It approaches the subject without agenda and refuses to pass judgement; a decision that led some to decry the film as an advocate of substance abuse. But for all the controversy, the drugs in Trainspotting are little more than a dramatic device used to illustrate a broader point. Because Trainspotting is as much about narcotics, as Fight Club is about fighting. The shocking bare knuckle boxing in Fincher’s tale of modern frustration is of course, just an excuse to explore the bigger issues of a generation. And the same is true of Trainspotting. It’s not interested in the use and abuse of drugs; it’s interested in the reasons why.

The problem I find with many films about substance abuse is that they become so determined to document the sobering reality of addiction, that they consequently limit themselves and end up feeling laboured. Movies like Requiem for a Dream, for example, revel in the gritty, day-to-day detail, but ultimately conclude two hours of crazy camera angles with little more to say than “drugs are bad”. But that’s hardly a revelation. After all, it’s a lesson drummed into us from an early age. So in the end the exercise sort of feels a bit pointless. Trainspotting however, has the good sense to respect its audience. It knows we all know drugs are bad. It says so in the first five minutes. It addresses the point, but doesn’t get hung up on it, which enables the film to throw its net far wider than the confines of a single issue. Now there are of course moral lessons to be found in Trainspotting, but they are part of a richer tapestry. By broadening its focus, Trainspotting becomes a much more layered experience. It delves deeper into the lives of its protagonists and, as a result, has far more to say than most other contemporary ‘drug films’.

In many ways, Trainspotting feels more like a coming of age movie, than a ‘drug film’. The characters aren’t just heroin addicts; they’re well developed, fully realised young adults making their way in the world. Renton, our protagonist played by Ewan McGregor, is standing on the precipice of the rest of his life and like any young person, is trying to figure out which path he wants to take. The way Renton sees it, he has two options: on the one hand he has his friends and a life of substance abuse, free of responsibility and petty concerns; on the other, he has parents and a life of nine to five work, mindless consumerism and Saturday night game shows. To Renton it’s not a difficult choice. In his famous opening speech, he rejects the conventional route. Like so many young people, he looks to his parents and the older generation and decides that their life isn’t for him. Like Benjamin Braddock in The Graduate, Renton wants something different, though he doesn’t seem to know exactly what. But it’s this search for something different that leads him to heroin; a drug that offers a life beyond the norm. Despite what he might say, to Renton, heroin isn’t just about the pleasure; it’s about escape. It frees him from commitment and boredom and all the little worries that come with the daily grind. It simplifies the complications of modern life. In a world where most of us are forced to wait a full year for one week in the sun, heroin offers instant satisfaction. But most importantly, it offers a sense of purpose. Renton and his friends, like most of us, are simply floating through life with no real idea where they’re going. But heroin gives them direction. It gives them something to aim for; a reason to get up in the morning. When Renton steals money from his mother’s purse to fund his habit, his parents fail to notice because they’re mesmerised by the television in the living room. Entranced by the flickering images in front of them, they themselves start to resemble junkies in a self induced stupor.  And at this moment, as Renton darts about the house in the background, it’s the drug addict that seems to know what he’s doing with himself. He at least knows what he wants from life, which is more than can be said for most of us.

But Renton is realistic. He knows he’s playing a dangerous game and after a run in with the law and a near fatal overdose, he decides it’s time to move on, or it would be if he could escape his mates. Trainspotting is refreshingly frank in its portrayal of modern friendship. The bonds that tie their group together are tenuous at best. They are friends and have been for a long time, but they’ve outgrown each other and one can’t help but feel that the catalyst for their friendship has been long since forgotten. It’s routine that keeps them together now, connected only by the past they share and the drugs they crave. Continually referring to them as his “so called mates”, Renton knows their time together has run its course and he’s grown tired of that scene.  He yearns to breakaway and go it alone. So at the end of the film, he steals the money they made from a major drug deal and leaves his friends and his old ways behind. He wipes the slate clean, starts afresh and finally embraces the life he never wanted.

In reality, Trainspotting is a film about rebellion. It’s about the ebb and flow of friendships. It’s about boredom. It’s about a time and a place. It’s about being young and not knowing what you want to do with your life. It’s about moving on, breaking free, closing one chapter and opening another. It’s about finding your own way, going it alone and the realisation that no matter how hard you try, no matter how hard you fight, ultimately we all end up turning into our parents. In this respect, Trainspotting feels thematically closer to films like The Graduate than it does to other contemporary ‘drug films’, like Requiem for a Dream. It works, because its themes are broader than drug use. Trainspotting’s greatest strength comes from its protagonists reflections on life. It’s at its best when musing on relationships and the modern age, on youth culture and club life.  It endures and continues to endure because its themes are universal. While Renton may represent a dark side of society, for all his amorality he remains a character we can relate to, whereas someone like Raoul Duke in Fear and Loathing in Las Vegas is a bit more of a stretch for most of us. Because Trainspotting isn’t just for those fascinated or amused by the antics of the inebriated. It’s a film for all those who went straight; who got a job, got a family and got a fucking big television. It’s a film for all those who chose life.
Posted by second-take at 17:34