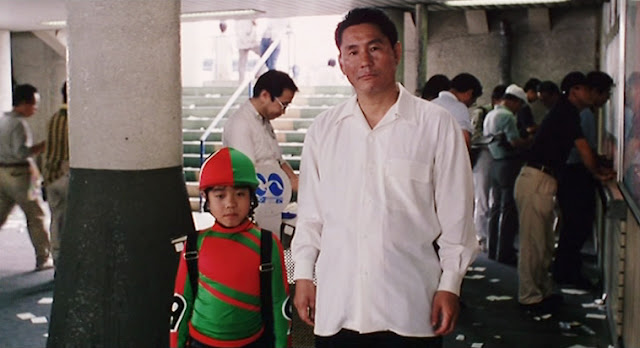 For many of those in the West, the grizzled, impassive presence of Takeshi Kitano usually means one thing; a bit of the ‘old ultra violence’. Having gained cult status on the world stage as the star of films like Zatoichi and Battle Royale, Kitano’s international career seems to have been built on the foundations of blood and guts. But in Kikujiro, we find him on an altogether different outing; and one that comes as a rather pleasant surprise. Written, directed and starring Kitano as the film’s eponymous reprobate, this tale of childhood isolation and unlikely friendship is funny, tragic and ultimately deeply affecting in the most gentle of ways.


Set in the haze of the summer holidays, Kikujiro stars Yusuke Sekiguchi as Masao, a forlorn, introverted nine year old who, having lived with his Grandmother for as long as he can remember, becomes increasingly curious about his absent parents. Although he’s aware his father died in an accident, it’s the whereabouts of his estranged mother that proves to be particularly troubling. Informed by his Grandmother that “she’s far away”, Masao is assured that his mother is “working hard just for [him]”. But with his short life seemingly devoid of maternal contact, Masao’s curiosity eventually gets the better of him. So as his friends depart Tokyo for their family holidays, Masao decides to make his way, on his own, to find his mother. But unfortunately he’s barely out of the neighbourhood before he runs into trouble. Confronted by a group of local bullies, Masao only manages to escape thanks to the intervention of his former neighbour, the wife of Kikujiro. Understandably, she’s concerned about Masao’s plans, but instead of taking him back to his Grandmother as you might expect, she enlists the services of her rude, brash and generally no good husband, to escort the young lad across the country. And so, what follows is a slow, meditative amble through Japan, as this most unlikely of pairs build a tentative friendship.

With their subsequent journey punctuated by - or consisting of - a series of isolated incidents and random encounters, Kikujiro is, in terms of narrative, a fairly loose affair. But, like all the best road movies, it’s not really about geographical progress; it’s about a nine year old boy taking his first steps into the wider world. A journey as seen through the eyes of a child, Kikujiro is a trip through the peculiar tapestry of humanity, finding humour, fear, sadness and kindness in the somewhat surreal banality of the everyday. Imbued with the melancholy of childhood, the film brilliantly captures that sense of limbo that one associates with a child’s summer. With landscapes that feel somehow almost infinite and overwhelmingly still, the film attains the qualities of a hazy mirage. And while it may not be apparent at first, this subtly stylised, diffused vision of Japan even has something of the fairytale about it.

Making no attempt to satisfactorily explain the practicalities of Masao’s impromptu road trip, the film is happy to brush over the rather large narrative hurdle that is the nine year old’s Grandmother. Although Kikujiro’s wife covers for Masao, telling his Grandmother that he’s gone to the beach with her husband, the pair are subsequently away for what must be well over a week. Is she not concerned? Wouldn’t she have called the police? Now most films, in such a situation, would probably have attempted to fabricate some sort of scenario to excuse Masao’s prolonged absence, but Kitano seems to feel no need to waste time on something so immaterial to the overall story. This sort of disregard for common logic, combined with hand drawn title cards and the innocent but delightfully endearing soundtrack, suggests the childlike POV isn’t just affecting the contents of Kikujiro, but is even reflected in the films very construction. Told predominantly through exquisitely composed, but refreshingly unfussy visuals, Kitano makes the most of every cut and is unusually selective with what he shows on screen and what he doesn’t. But this approach, that almost strips the story to its bare bones, creates a sort of narrative mantra that starts to feel rather similar to the sort of rhythmic chug-chug of a child’s story; like the visual equivalent of a nine year old saying “Then this happened. And after that we did this. And then this happened.” Of course it could be argued that all editing is fundamentally “and then this happened”, but in Kikujiro the technique feels unusually, but by no means unpleasantly blunt. It’s as if the entire film is designed to resemble the manner in which a child might recount the story. It’s Masao’s personal rendition of his time with Kikujiro, like an extended version of a “what I did over my summer holidays” style report.

Admittedly the film isn’t entirely without fault. The occasional and somewhat unnecessary use of graphics seems strangely incongruous, and the film’s rhythm does lose some of its pace in the fourth quarter. But these, really, are minor quibbles. While it’s true the idea of the burgeoning friendship between unlikely parties is nothing new, this budding relationship is handled with such deftness of touch that it surpasses the limitations and avoids the potential clichés of its concept. And though the film shows a sweeter side to Kitano, the execution never feels too saccharine. The brutish Kikujiro may have found some fleeting sense of purpose with Masao, but the film avoids the simplification of easy redemption. There are no big character arcs here. Instead, the film is concerned with something far more delicate and intangible. Focused on the small acts of unheralded, everyday kindness, Kikujiro sighs with bittersweet pathos, leaving you with a lasting sense of lives touched, if only for a moment, before going their separate ways. Now a lesser movie would try and push the obvious emotional potential of the story, but rather than overplay its hand, this is an understated affair. And really, it’s that that gives Kikujiro its quietly enduring power.