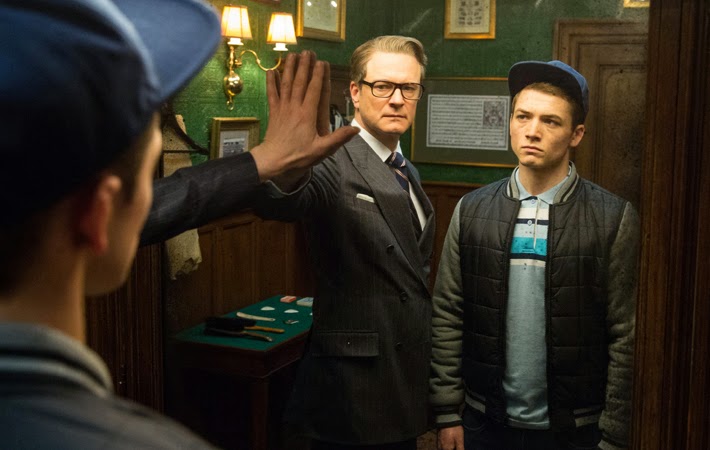 Watching Matthew Vaughn’s KINGSMAN: THE SECRET SERVICE, you somehow feel like you’ve come round full circle. It wasn’t that long ago that the gritty realism of Jason Bourne heralded a new era for the espionage thriller, forcing a then redundant James Bond to reinvent himself with the kitsch free CASINO ROYALE. Gone were the silly gadgets and corny quips — they belonged to yesteryear. But then, via SKYFALL, the franchise soon began to in re-introduce a few of the old staples. And with that, the door was nudged open, apparently giving Vaughn free reign to now complete the cycle. Hence what we get with KINGSMAN is a gloves-off, full on James Bond pastiche that harks back to the sort of films you used to watch on a bank holiday. It’s an old school, tongue-in-cheek, Boy’s Own adventure — albeit with an extra slice of ultra-violence.

Reuniting Vaughn with his KICK ASS writing partner Jane Goldman, KINGSMAN stars Taron Egerton as ‘Eggsy’, a wayward, delinquent ‘youff’ who might just have what it takes to become an international man of mystery. Having been helped out of a spot of bother by Colin Firth’s oh-so-dapper secret agent — a role he was born to play — Eggsy discovers that his father was once a member of the Kingsman: a super suave group of gentlemen spies that happen to be recruiting. Mentored by Firth, our rough diamond is soon enrolled on the world’s most dangerous job interview, joining a group of would-be spies as they’re put through their paces by a series of increasingly elaborate tests. But as ‘Eggsy’ learns the ways of the gentleman, Samuel L. Jackson’s billionaire supervillain (think Steve Jobs crossed with Blowfeld) is preparing a maniacal plan that will lead to genocide on a biblical scale — isn’t it always the way.

If all that sounds a bit familiar then that’s the point. Built on a core conflict between the old and the new, KINGSMAN pits the stiff upper lip against the modern, urban chav. It’s a James Bond film for the iPod generation that quite deliberately, and quite lovingly, works its way through the spy film check list, ticking off one classic cliché at a time. We’ve got the supervillain with the ridiculously elaborate lair, the lethal Oddjob-style right-hand man (or woman) and we’ve even got the endless supply of expendable uniformed henchmen. It’s all here, but it’s all very knowing.

KINGSMAN revels in its own absurdity and Vaughn is acutely aware that the gadgets are unbelievable and the action is silly. He knows we’ve all seen these spy films a thousand times before but he’s prepared to take us on the adventure because it’s actually pretty good fun. Of course the slight problem with this is, that while the story is neat and pacey, the fact that it’s one big homage means that events are never far from predictable. In parts, even the action feels a bit too ‘much of a muchness’, favouring the increasingly over used slow-mo/super speed fight scenes and relying on CGI that makes a lot of the brawls appear slightly unreal. It’s therefore left to the set pieces to inject some creative flare.

Channelling a very contemporary discontent with wealth disparity, a sequence involving a cacophony of exploding heads, that sees world leaders and the uber-rich 1% burst like champagne corks, is a joyous moment of infectious glee. Many such scenes earn big laughs and fans of KICK ASS are sure to embrace the familiar irreverent tone. But that doesn’t mean it isn’t brutal and in parts the graphic violence is likely to raise some eye brows.

But despite these issues, potentially divisive as they are, there’s enough fun here to forgive the film’s shortcomings. KINGSMAN certainly isn’t anything you haven’t seen before, but for those looking for a bit of Friday night escapism, this rebuttal to the more earnest spy films of late, will certainly suffice.

So does this mean that when Bourne returns for his next adventure we can expect to see him in a tuxedo sipping Vodka Martinis? Only time will tell…