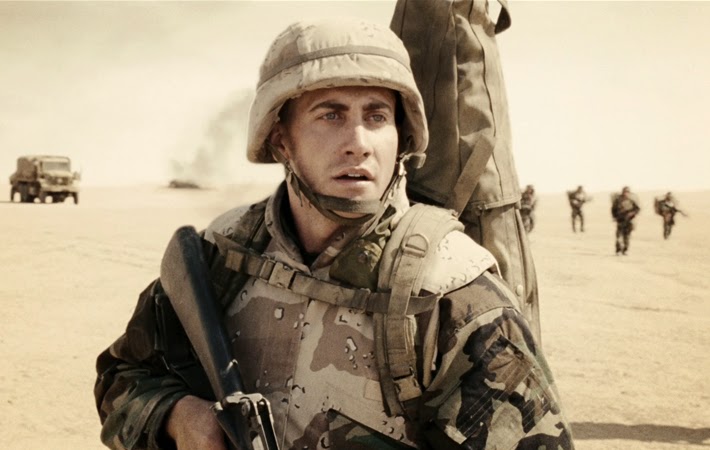 JARHEAD is about expectations. It's somewhat ironic then, that when it was released in 2005, this unconventional take on the First Gulf War failed to live up to the hype. Boasting rising star Jake Gyllenhaal in the lead, potential for politically charged subject matter and Sam Mendes in the director’s chair — then on a hot streak after AMERICAN BEAUTY and ROAD TO PERDITION — JARHEAD had all the makings of a critical and commercial hit. But the reception was lukewarm . It just wasn’t what we thought it’d be. Where we’d expected a harrowing account of the senselessness of conflict, we were given a war film without a war. This wasn’t a tale of young men cut down in their prime, it was a story of a generally unlikable motley crew who want nothing more than to ‘kick some Iraqy ass’. But while this refusal to pander to expectations may frustrate some, this fresh take on modern conflict could just make JARDHEAD one of the definitive war films of the 21st century so far.


After training to be a scout sniper, Gyllenhaal’s Anthony Swafford is sent to the gulf to prepare for imminent conflict. But when he and his fellow marines arrive in the desert, it’s pretty clear that their war isn’t going to be quite what they expected. A formidable army has amassed in the Persian Gulf, yet nothing seems to happen and the only thing Swafford kills is time. So, waiting for the fighting to start, they train, hydrate and get up to no good, doing this until their frustration and boredom takes them to breaking point. But these men, through their training, have been instilled with a thirst for combat and they’re desperate to see some action. They’ve been taught to lust after the ‘pink mist’— a halo like spray produced from the headshot of a sniper kill — but this image, that has been offered to them second hand, is now an unattainable ideal; because things, quite simply, have moved on.
One of the films key moments comes as an auditorium of marines works themselves into a frenzy of bloodlust whilst watching the famous ‘Ride of the Valkyries’ sequence from APOCALYPSE NOW. Though it would probably be considered one of, if not the definitive anti-war film, the marines sing along with the music and mimic the on-screen action. But Coppola’s seminal work is abruptly cut short when a loudspeaker announcement interjects and informs the soldiers that they are to prepare for war. Despite what they’ve just been watching, this news is not met with fear or trepidation, it’s met with cheers and celebrations — the marines are as excited as kids at Christmas. They can’t wait to ride into battle, machine gun in hand, hanging off the side of a chopper. They can’t wait to re-live what they’ve just seen. Even the announcer gleefully quotes FULL METAL JACKET, telling the marines to ‘get some!’ But unfortunately for Swafford, his gung-ho fantasy is abruptly curtailed when the true nature of their ride into battle is revealed. In contrast to what they might have expected, the next scene shows the marines heading into the field of conflict on what looks to be a commercial airliner. Being served peanuts by stewardesses, it’s all very civil and frankly it ruins the fiction and the sense of adventure. And that is JARHEAD in a nutshell. 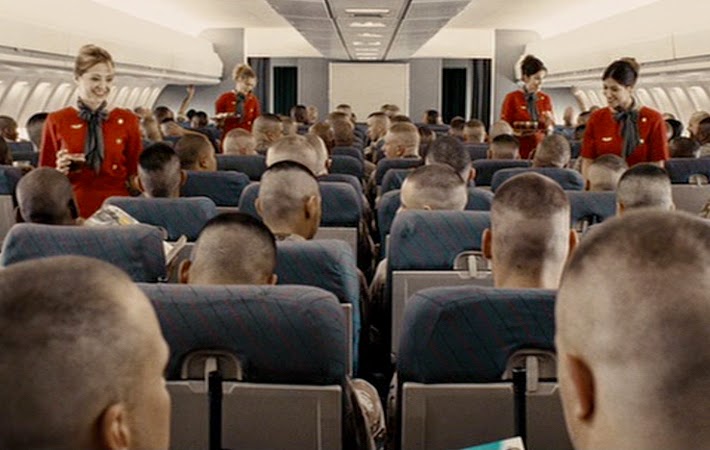 Swafford and his fellow marines are the first of what you might call the ‘second hand generation’ — an age group that has grown up pretty much bombarded by images of what has come before. Swafford’s generation was the first to have VHS, so they could watch their favourite films again and again. They had MTV, video games and an increasingly rampant media promoting an obsession with celebrity and rolling news — imagine the hours of Vietnam coverage these marines would have watched whilst growing up in the seventies. They’ve consumed all this second hand information from an early age and it has influenced their expectations of what their own experiences should be. The marines are constantly talking about films and pop culture because it’s their main frame of reference — it’s how they understand the world around them. But because the world and conflict has changed, Swafford’s expectations jar severely with the reality of war. Now many  films have depicted soldiers heading off to battle with an unrealistic idea of what awaits them. It’s nothing new to see a soldier’s loss of innocence as he’s exposed to the brutal horrors of conflict. But in JARHEAD we see Swafford’s original optimism eroded for a very different reason. And his dilemma is one that is curiously modern.
If we take the consumption of music as an example — though the same obviously applies for many different areas — we see a medium that has been revolutionised by the introduction of online retailers and the MP3. But if you’ve ever mourned the loss of experience that came with a trip to the record store, where you’d chat with the owner and discuss and discover new musical landscapes through word of mouth, then perhaps JARHEAD, as strange as it sounds, might just strike a chord. The sanitisation of progress has, in a way, robbed us of our stories and our adventures — at least adventures of the kind we’ve been brought up on. Swafford has been promised a certain type of war, not just by their superiors, but by all the films and television. Despite the fact that many of these movies supposedly exposed the ‘realities’ of conflict, the marines of JARHEAD still want the ‘pink mist’. They want to revel in the horror so they too can say war is hell — just like Martin Sheen. But for Swafford, war isn’t hell, it’s boring. And because they are denied the experience they so crave, they must search for another way to define themselves: a realisation that leaves Swafford and his contemporaries feeling lost and despondent. These broad issues of course, apply not just to the theatre of conflict but to society as whole. In the age of Facebook, celebrity twitter accounts and the ubiquitous selfie, the prevalence of images creating falsified expectations has reached new heights. So perhaps JARHEAD needs to be re-assessed. After all, the issues it addresses are becoming more relevant with every year.
Posted by second-take at 19:29