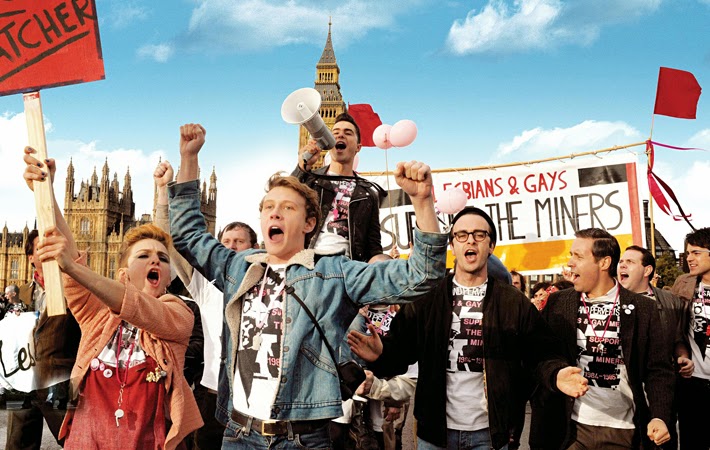 Use of the term ‘inspirational true story’ can feel like something of cliché. It’s one of those sayings that’s bandied around with so much ease that it’s sort of lost its meaning. But when it comes to PRIDE—the true story of a group of LGBT activists supporting the miners through the turmoil of the Thatcher-era strikes—the phrase feels apt. It would have been easy for such a story to be just another working class Brit flick straight off the BILLY ELLIOT conveyer belt. But while it certainly doesn’t break the mould, PRIDE is more than just MADE IN DAGENHAM with a bit of gay flare; it’s funny, heartening and in the end, genuinely uplifting.

The year is 1984: the miners are striking and LGBT activists are campaigning for Lesbian and Gay equality. With both groups marginalised by society and demonised by the press, outspoken lobbyist Mark (Ben Schnetzer) feels an affinity with the colliers and as a demonstration of solidarity, sets up ‘Lesbians and Gays Support the Miners’ (LGSM). With his friends soon on board, the movement gathers momentum and as it does, the ragtag group focus their support on a single mining village in Wales. But when some of the locals, as a token of gratitude, hesitantly invite their unlikely backers to stay, the collision of lifestyles inevitably causes friction.
Though director Matthew Warchus is gifted with an impressive cast that includes Imelda Staunton, Bill Nighy, Dominic West and Paddy Considine (all on top form), he deserves credit for ensuring that PRIDE doesn’t just feel like a ‘parade of stars’. The broad ensemble is well balanced and while all involved get their moment to shine, no one star feels greater than the whole—though it has to be said that Andrew Scott’s performance as Gethin does prove particularly memorable. Better known to most as Moriarty in SHERLOCK, Scott plays one of the more reticent members of LGSM, who, having fled Wales due to persecution as a young man, is reluctant to cross back over the border. However, his subsequent reunion with the land of his birth, brought home by the poignant sing along in the miners’ welfare club, will send shivers down your spine. And it’s moments like these, coupled with the film’s sense of sincere empathy, that elevates PRIDE above what could have been a pretty formulaic concept.
You feel the plight, not just of the miners, but of the gay community as a whole and really—the clue’s in the title—the film belongs to them. Though LGSM provides a comforting substitute family, with its members beaten in the streets, disowned by their relatives and now facing the horrors of AIDS, their situation appears almost impossible. But PRIDE doesn’t allow itself to wallow in misery; nor is it dragged into farce by the colourful characters and comedic culture clash. With a solid script from Stephen Beresford, it generally navigates the potentially difficult tightrope between these two tonal opposites, finding a comfortable medium between the light and the dark.
Unfortunately, due to a loss of direction, things do start to flag a little in the middle, but thankfully Warchus rights the ship just in time for the rousing finale. It’s a denouement that could be accused of being slightly predictable—without it, it’s doubtful the film would have been made—but at the risk of sounding clichéd, the chances are you’ll be so thoroughly inspired, you probably won’t care.
Originally posted on Screen Relish 27th August 2014
Posted by second-take at 14:06