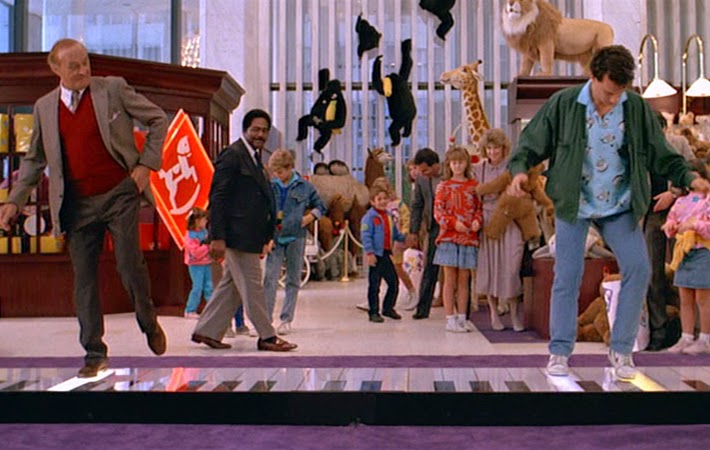 With Penny Marshall’s BIG getting its Blu-ray re-release on the 12th May, it seems a good time to take a second look at a film that, alongside THE GOONIES and STAND BY ME, has become something of an eighties kid’s classic. With one of America’s most likable actors in the leading role, it’s charming, funny and endlessly watchable. But BIG isn’t your average bank holiday favourite. While it may appear to be the celluloid equivalent of a warm mug of cocoa, I’ve always had this feeling there was something else going on. Because beneath the soft surface, it seems to me that BIG is relishing the opportunity to take a sly stab at a very eighties way of life.

Making full use of its ‘fish out of water’ plot device—in which the 12-year-old Josh Baskin wishes he were big, wakes up in the body of Tom Hanks and subsequently moves to New York City where he gets a job at a toy company—BIG presents the adult world from an outsiders point of view. And it’s from this vantage point, through the perspective of a child, that we begin to truly appreciate, not just the peculiarities of adult life, but the absurdities of a culture and a time that will always be synonymous with high flyers, big spenders and those now infamous city yuppies.
As Josh’s childish insights help him climb the corporate ladder, BIG gleefully takes the opportunity to poke fun at the pomposity of corporate decorum and the staples of office life. You only need look at the company party, a ridiculously over the top yet painfully tiresome affair, to recognise that the film is looking at the contemporary working world with something of a grimace. But it’s in the employees, specifically the executives, that BIG hones in on the prevailing culture of the time and really starts to have its fun.
The office ‘bullshitter’, Paul (played by John Heard) is the epitome of the eighties yuppie and the embodiment of everything that was wrong with that decade. Like a Sesame Street version of AMERICAN PSYCHO’s Patrick Bateman, he moans about the size of his office, obsesses over his rivals and brawls when he loses at paddleball. He’s sycophantic, self involved and more than a little bit childish. But that is of course, the whole point. The great irony of BIG is that these ‘grown ups’, these bastions of eighties ambition are, in reality, every bit as immature as the film’s twelve year old lead. 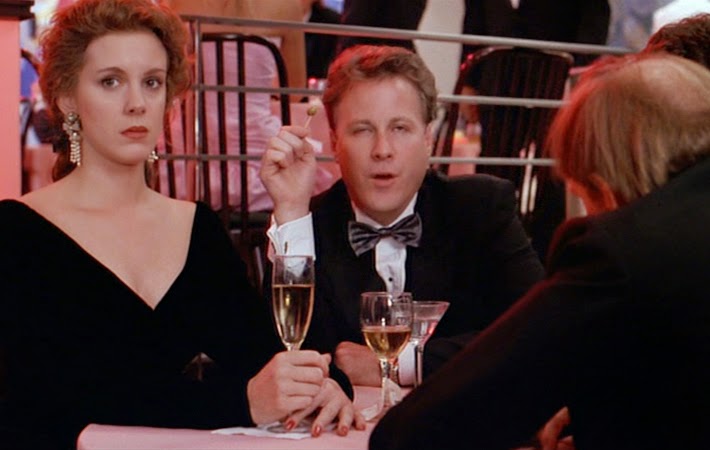 Though Susan, Josh’s office sweetheart, may appear to be a confident, self-assured, working woman, there is something about Elizabeth Perkins’ performance that suggests it’s all a little too forced. Full of clichéd labels and faux, self-empowering philosophies about modern professional life, Susan’s words often feel overly familiar or second-hand. As if she’s trying to be the ‘adult’ she thinks she’s supposed to be. But beneath the façade, Susan is just as vulnerable as any child lost in the big city. An imposter like the film’s protagonist, she too is just playing a role, because in that world it’s all about the image. When Josh coughs up the caviar at the office party, Susan’s instinctive reaction is to try and brush off the incident in an attempt to keep up appearances. She’s uncomfortable with the situation because the ‘man making a scene’ threatens her SEX AND THE CITY style persona—an image that she works hard to preserve.
It’s perhaps rather telling then, given their obvious flaws and blatant neuroses, that Susan and Paul are really all that BIG offers the viewer in terms of substantial adult roles. Aside from the company director, Macmillan, who’s of a different generation and seems to have been around long enough to rise above the ephemeral fashions of the day, they’re the film’s primary examples of the adult world and are, therefore, the film’s primary representatives of that society at that time. But that society, as portrayed in BIG, is one of status seeking and self obsession. A culture built on material success, skewed priorities and misplaced values, it’s held up as petty, laughable and little bit pathetic.
Now I’m not suggesting a biting satire on the yuppie lifestyle was the true intention of this family favourite. First and foremost, BIG is a kid’s film about growing up, moving on and yearning for the simplicity of childhood. But whether the dig was a conscious decision or not, it’s clear that this sweet-natured comedy has a very low opinion of the ‘greed is good’ ethos.  After all, it’s that culture that gave us big shoulder pads and a multitude of Gordon Gekko wannabes. And even in 1988, Penny Marshall knew that could only be a bad thing.