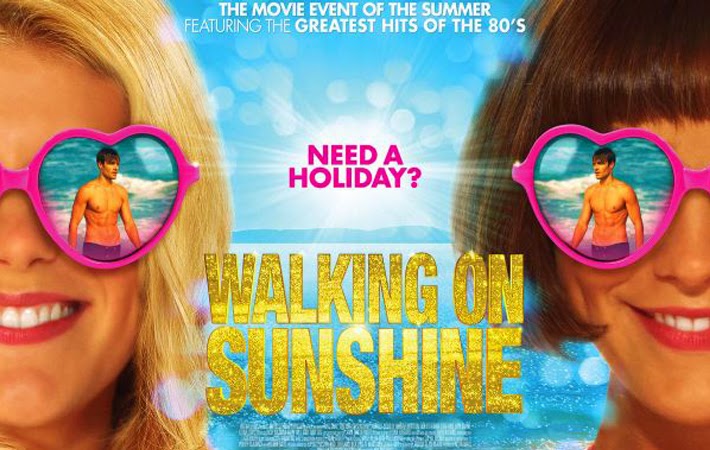 Musicals are always going to be a divisive genre. While some claim spontaneous song and dance routines to be a joyous escape, others find it difficult to get past the jarring level of theatricality. With this in mind, WALKING ON SUNSHINE, a musical featuring some of the eighties biggest and cheesiest hits, is never going convert the sceptics – and nor should it try. Refusing to apologise for itself, it’s admirable that the latest effort from Max Giwa and Dania Pasquini (the duo behind STREET DANCE) knows what it is and sticks to its guns. But despite this commitment to the cause, even the most devoted musical fan would surely struggle to defend the banal, uninspired and ultimately forgettable experience that is WALKING ON SUNSHINE.


Set in sun soaked Italy, the film stars Hannah Arterton (sister of Gemma) as Taylor: a reserved, studious type, struggling to come to terms with the shock news that her impulsive sister (Annabel Scholey) is due to marry a hunky Italian (Giulio Berruti) she’s known for only a matter of weeks – a situation complicated further by the unfortunate coincidence that he just happens to be Taylor’s former holiday romance from three years earlier. But with her sister unaware of this previous fling, Taylor must keep the past under wraps and ignore the fact that the spark between her and her old flame is still very much alive.
For me, musicals work best when based in a world outside the norm. Within a fictionalised version of reality, the lyrical interludes become an extension of the action, thus making the transition from dialogue to song feel like less of a leap – see, for example, the teen dream of fast cars and ultra-slick hairstyles as featured in GREASE. Unfortunately, WALKING ON SUNSHINE doesn’t quite succeed in manufacturing a plausible world in which impromptu musical routines feel totally credible and as such, some of the songs feel disconcertingly incongruous, resulting in a dramatic rhythm that at times, becomes uncomfortably staccato. But it would be a very cold individual that came away from WALKING ON SUNSHINE not humming at least one of its many catchy tunes. While the on-screen renditions of such eighties classics as ‘Girls Just Wanna Have Fun‘ and ‘White Wedding‘ don’t exactly live up to the originals, the musical numbers are undeniably energetic and generally enjoyable enough to “get you going”. But really, the main issue here doesn’t concern the music; it’s the bits in between that are the real problem.
Relying on chiselled Italian abs and lame attempts at comic relief (predictably coming from the heavier members of the cast) to sustain interest, it feels as though key components, like convincing characters and a compelling narrative, were little more than an afterthought. This, combined with a range of questionable performances – perhaps over-compensating for the clunky script and woeful dialogue – means that the scenes not saved by a musical interlude are so flat and lacklustre the whole experience becomes almost draining.
Of course, there will be some who claim it’s all “just a bit of fun” – which may well be true. Clearly WALKING ON SUNSHINE is keen to demonstrate it’s not taking things too seriously. But the fact that it’s happy to laugh at itself should not excuse paper-thin characters, poor direction and wall-to-wall clichés. Showing a worrying lack of respect for its audience, WALKING ON SUNSHINE wants to be MAMMA MIA! with an eighties twist, but in the end feels more like a 6th form drama group singing along to an early edition of ‘Now That’s What I Call Music’.
Originally posted on Screen Relish 21st June 2014
Posted by second-take at 09:55