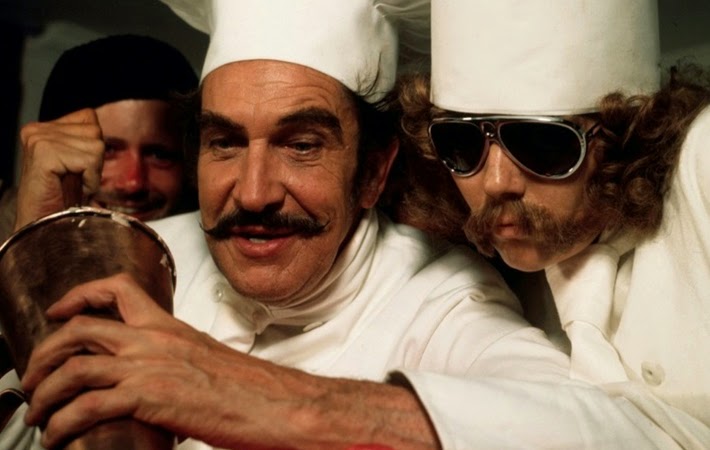 If you take the LEAGUE OF GENTLEMEN and DELICATESSEN, add in a little of David Fincher’s SEVEN, a dash of TALES OF THE UNEXPECTED and even a sprinkle of CARRY ON, you might just get something like THEATRE OF BLOOD; a gruesome, daft, grimly comical experience that’s as bonkers as that curious concoction makes it sound.

Vincent Price plays Edward Lionheart, a devoted, yet unappreciated thespian, who takes bloody revenge on those who failed to acknowledge his acting ‘genius’. Luring his critics to a grisly, tortuous death, Lionheart takes inspiration from some of Shakespeare’s most macabre moments, creating increasingly elaborate set ups that involve decapitation, electrocution and a couple of cute dogs forced fed to their owner.
Despite the best efforts of a visually crisp, vibrant Blu-ray upgrade, THEATRE OF BLOOD hasn’t exactly aged well. Boasting a surprising cast, that includes such seventies staples as Diana Rigg, Eric Sykes, Arthur Lowe and Milo O’Shea, it’s certainly of its time. But in a way, that’s part of the charm and actually serves to make THEATRE OF BLOOD a richer experience. The dated soundtrack, saturated colours and seventies fashion, all conspire to instil it with a surreal, strange, almost other-worldly quality. This, combined with Price doing what he does best and some truly barmy moments (i.e. sword fighting on trampolines) makes THEATRE OF BLOOD as delightfully theatrical as the film’s over-the-top protagonist.
However, like many horror films of this mould, it does suffer from the problem of repetition. Any narrative structure that involves the murder of no less than eight separate victims, each with their own preamble, will inevitably be a little hit and miss and have moments where it starts to drag. But for the most part, the set pieces remain inventive and director Douglas Hickox works hard to make each murder as distinct as possible.
Though it’s billed as a comedy horror, in truth, it’s actually pretty hard to pin down. Lurching violently from genuinely laugh-out-loud moments (see the hilariously inept and wonderfully clueless police force) to scenes of blood curdling, albeit tongue-in-cheek, violence, the tonal shifts can feel disconcertingly extreme. When one of the critics returns home whilst his wife is getting a massage, he mistakes her groans of pleasure, heard from outside the bedroom, as evidence that she’s having an affair. The whole thing starts to feel a bit CONFESSIONS OF A WINDOW CLEANER until the sequence suddenly takes a darker turn when he bursts into the room and swiftly smothers his beloved with a pillow. While such wild shifts may frustrate some viewers, this tonal discontinuity actually gives THEATRE OF BLOOD an enjoyably anarchic, unexpected sense of creative abandon. For horror aficionados, it’s highly recommended.
Originally posted on Screen Relish 11th May 2014
Posted by second-take at 12:52