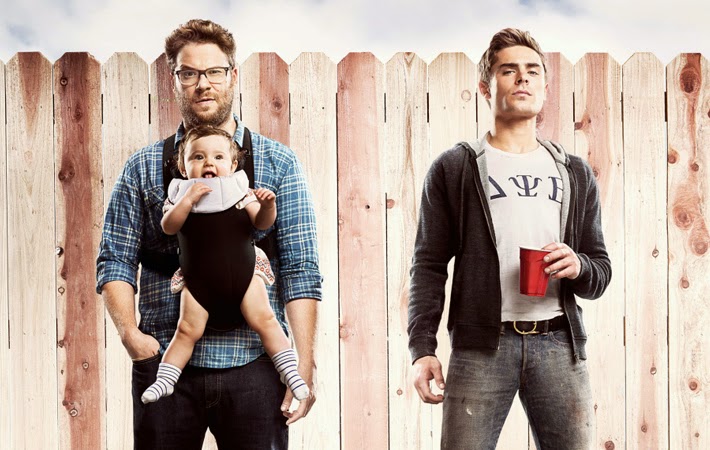 If you’re familiar with the previous films of director Nicholas Stoller, like FORGETTING SARAH MARSHALL and GET HIM TO THE GREEK, the chances are you’ll have a good idea of what to expect from his latest effort, BAD NEIGHBOURS (aka NEIGHBORS to give it its Stateside moniker). Like his earlier work, it’s crude, silly and laden with an unhealthy number of dick jokes. But while the likes of GET HIM TO THE GREEK was sustained (just) by the occasional laugh out loud high point, BAD NEIGHBOURS is disappointingly devoid of any real stand out moments.

Mac and Kelly Radner (played by Seth Rogen and Rose Byrne respectively) are a young couple with a baby girl, attempting to settle down and start a home. But when a fraternity house moves in next door, the constant partying and wild antics soon ruin their idyllic vision of suburban life, forcing Mac and Kelly to rid themselves of the late night revellers by whatever means necessary. Of course, the frat boys, and particularly their president (played by Zac Efron), are not so easily discouraged, and what ensues is series of zany schemes and crazy pranks that just aren’t as zany, crazy or indeed funny as they ought to be.
Imbued with a general sense that the whole thing’s been hastily cobbled together, BAD NEIGHBOURS is just too formulaic to be as outrageous and wild as it might like. Though the film does its best to perpetuate the mythology of the fraternity house partying like it’s 1999, it’s all far too forced and in the end feels limp and hackneyed. Though Efron puts in a good effort with a character that is generally unlikeable, he and his frat boy brothers, with their barrels of weed and homemade dildos, feel like the ill-conceived rejects of a straight-to-video AMERICAN PIE sequel. But all that could be forgiven if there were just a few more laughs.
Aside from an incident in which Mac falls fowl of a hidden airbag, too many jokes fall flat and it actually feels pretty lazy. When you’re watching Seth Rogen milk his wife’s engorged breasts or you’re confronted with a character who can induce an erection at will—without doubt, the comedy low point here—you know you’re scraping the barrel.
Curiously for a comedy, BAD NEIGHBOURS is actually at its best when it’s not trying to make you laugh. As the frat boys approach graduation and stare their future in the face, Efron and co. are forced to consider what it means to move on and enter the real world. And, while Rogan is on autopilot as the same lovable stoner he’s played in pretty much every film, he and Byrne manage to generate a decent, likeable chemistry with some enjoyable back and forth banter. Thanks to this pairing, BAD NEIGHBOURS actually comes to a rather sweet conclusion, reasoning that maybe it’s okay to settle down. Maybe it’s okay to grow up. If only Stoller had taken his own advice.
For all the sex, drugs and genital humour, BAD NEIGHBOURS is an experience that is actually pretty bland. So if you want a generally enjoyable, occasionally amusing romp, you’re better off sticking with GET HIM TO THE GREEK. And honestly, I never thought I’d say that.
Originally posted on Screen Relish 2nd May 2014
Posted by second-take at 14:47